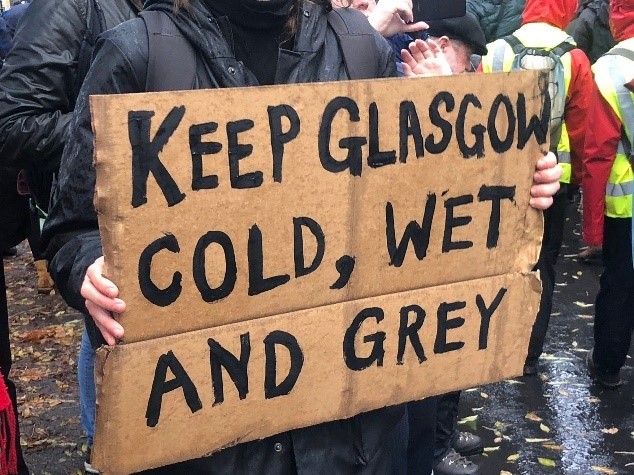 ‘Keep Glasgow cold, wet and grey’ was one of the better placards being waved at the children’s protest during the COP26 summit. It was apposite as well given the unseasonably balmy weather at the end of the first week of negotiations.

WHEB was in Glasgow to speak at a couple of events being organised on the fringes of the official COP26 negotiations. We were hoping to learn more about the fleet of initiatives being launched at the event and to play our own small part in creating the ‘atmosphere of urgency, action and collaboration’ that might help tip the balance in favour of more progress.

While the achievements of the conference have so far been quite mixed, it has catalysed a range of new commitments. WHEB’s investment portfolio is a microcosm that illustrates the pace of change. In December 2019, the portfolio contained just one company that had committed to achieve net zero carbon emissions by 2050. By the end of October, less than two years later, nearly 50% of the portfolio had issued this commitment. The majority of these commitments have come in 2021.

However, there is room for scepticism in some of these commitments. Mark Carney’s Glasgow Financial Alliance for Net Zero (GFANZ), which announced that financiers managing $130 trillion were now committed to net zero, drew particular opprobrium. In fact, this is an ‘ambition’ with only one third committed to net zero today. Still, that equates to nearly $50 trillion.

The same criticism can be levelled at the Net Zero Asset Manager initiative of which WHEB is a part. This initiative has 220 signatories with $57 trillion in assets under management. 45 managers have now published reports showing that $4.2 trillion is currently managed in line with achieving net zero by 2050. Only a handful of managers, including WHEB, manage 100% of their assets in this way.

Nonetheless, John Kerry, the US Special Presidential Envoy for Climate, and a veteran of COP negotiations, spoke of his optimism at a Confederation of British Industry (CBI) event at the end of the first week. He put this down to the powerful role of the private sector, which he argued, is ahead of governments in their ambition and in their understanding of the climate challenge.

The same could also be said of young people. The persistent buzz of helicopters on the Friday and over the weekend, was a constant reminder of what is at stake. No panel presentation (or monthly update!) was complete without a reference to Greta Thunberg and the stark injustices of climate change for future generations and poorer nations that she underscores. Their presence is unquestionably having an impact on the negotiations.

A race to the top

And there has been progress. The International Energy Agency has totted up all the new pledges made at, and in the run-up to, Glasgow and concluded that these now put the world on track for 1.8°C.  These pledges include India’s commitment to achieve net zero carbon emissions by 2070 and the commitments made as part of the Global Methane Pledge.

The agenda has also broadened to include wider environmental issues including nature-based solutions and commitments to arrest biodiversity losses. The panel we participated in called for a change in the constitution of finance institutions to embed purpose and incentivise delivery on wider stakeholder needs including carbon emission reductions alongside financial returns.

A glass half full

Scepticism is also appropriate about some of these pledges. How many of them will actually deliver real change on the ground is still very much open to debate. Climate Action Tracker, for example, argue that a more sober analysis of country pledges would generate 2.4°C of warming. 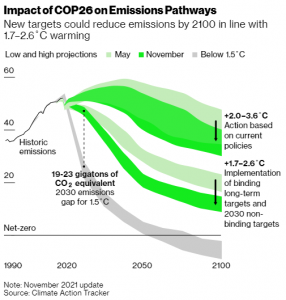 Whether it is 1.8°C or 2.4°C of warming, it is still too much. Too many in Government – and notably in the UK Treasury – continue to see action to reduce greenhouse gas emissions as carrying an unreasonable cost. But as the CBI’s Chief Economist put it on one panel, the costs are really investments that avoid the immeasurably larger costs resulting from inaction.

So, we have seen progress, but just not enough. The Glasgow talks were presented as ‘the last chance saloon’. This may not be entirely true, but if it isn’t, we are getting very close.