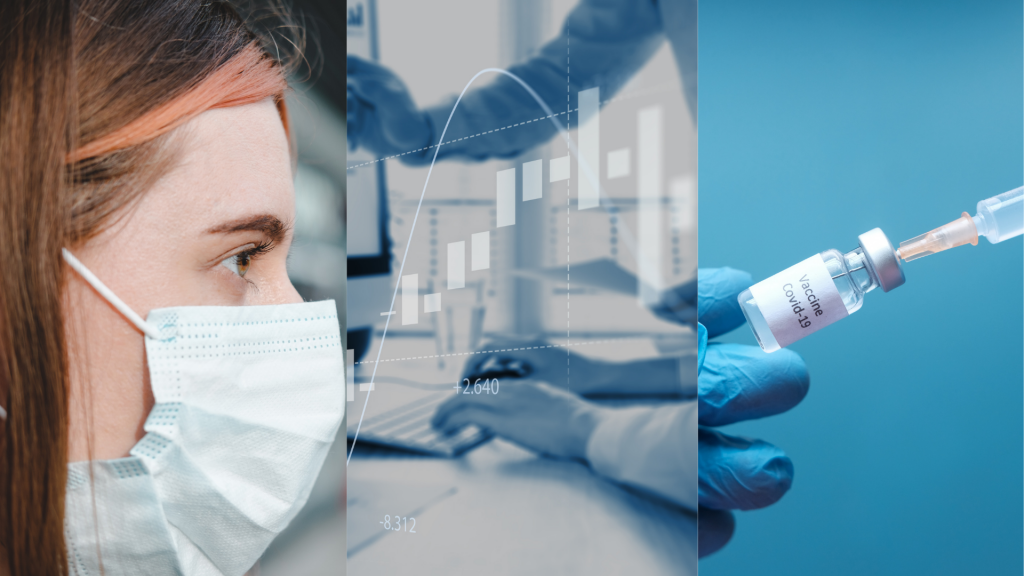 There have really been 3 key phases to investment markets over the last year:

These were 3 seismic changes in the world and investment markets.

In this article I discuss how we negotiated them, how the fund performed and, more importantly, what we see happening from here.

The way we invest in the Pengana Emerging Companies Fund has never changed. It’s pretty conservative, and we’re considered in the way we behave. From the end of March to the end of March the Small industrials Index was up 49.7%, which is a phenomenal year in that 12-month period. We were up 61.5%, and we’re pleased to have outperformed, but in that time we observed 3 seismic changes to investment markets which required a considered response.

In March 2020 when the pandemic hit, nobody knew how this would play out in relation to markets. At that point in time, it also looked like there was going to be a credit crisis, which was averted by the extent to which governments reacted through monetary policy and fiscal stimulus.

Some share prices fell as much as 80% in a month. Those stocks then bounced hundreds of per cent, but if you just freeze-frame that point in time, it looks worrying.

Our response was not to get caught up too much in the volatility. As we said then, times were unnerving, but people really needed to hold their nerve and define what risk was real and what was perceived. Where plenty of stocks fell very quickly, we knew there was not actually a huge amount of financial risk in the stock, and the valuations had corrected to an oversold situation. It was painful, but we knew that they were ultimately worth two or three times that.

In summary, in March we increased our cash weighting towards the Fund’s limit of 10% because we wanted to be ready if there were other opportunities. We saw that the chaos meant we needed to lower risk.

The governments then announced a reaction to repair, or head off, the credit crisis. Daily, there was volatility everywhere. This response was much quicker than the GFC where QE took over a year to be implemented, so the risk of a credit crisis was averted shortly after the major correction.

That was the big catalyst for us to decide not to be too conservative, because these markets can run, and thankfully we were able to skew back and invest confidently in many high quality businesses at bargain prices. During that time, not all stocks performed for us – like in any year, there were a few duds – but here are some of our top performers that helped us rise by nearly 90% over that period from the low.

Some of our top-performing stocks are companies like Uniti Wireless, which sells data-based networking. It’s very stable, but the share price fell. Now, it’s up 190% – almost triple in value from the lows. Now, there was nothing about the environment, pandemic, or stimulus that affected their business in any way whatsoever, and there’s very few businesses you can say that about. It was simply oversold.

Mainfreight is another one that almost tripled in value from the lows. It’s a global freight-forward business that moves product globally, though mainly in New Zealand and Australia. The products they move are largely consumables and stable products, and the demand for that was never going to fall too much – but the share price had. It shows just how wrong the market can get it. We were very happy to hold our nerve, and it paid off. This stock rose from $25 to $70, and was our largest investment during the year.

Lifestyle Communities is another. This business did look like it would have a negative earnings hit from the pandemic, and it did, but not in any meaningful way. They develop retirement villages, and the biggest risk to their business is if property prices fall, it’s hard for people to sell their property to move into the retirement village. There was nothing about the pandemic that was going to erase the need for retirement villages. It’s just that short term, there was a dry-up in settlements. Again, share price halved. We held our nerve. We spoke to the company. The balance sheet was fine, and that’s up two and a half times since the low.

Netwealth and HUB, again, great businesses. When financial planners were locked at home, they had time to think more strategically about their business and that maybe it is time to switch platforms. It turned out that Netwealth and HUB did benefit through significant market share gains, and they’ve risen phenomenally from the lows.

City Chic is a largely online retailer of plus-sized clothing for females in Australia, the US and the UK. Stock fell by 70% initially in March 2020 on fears that store closures would see sales evapourate. However, they had no debt, so their balance sheet was fine, and shoppers moved online. That stock fell to 80 cents, and it’s now $4, so it’s risen by fivefold from the lows.

There are plenty of companies that have had no impact whatsoever from the pandemic. They’re the sort of stocks we like to invest in in any market because we can’t predict anything at a macro level. From a cashflow point of view, it’s best to have the most resilient stocks, such as Austbrokers, Charter Hall, Hansen, HUB, Netwealth and Uniti Wireless.

We missed most of the retail bounce, and that’s because we didn’t see that retail, given what was going on, would perform as well as it did. So we missed companies such as Nick Scali, Kogan, Temple and Webster and JB Hifi. They’re now trading at all-time highs. Most of the recovery in the retail sector was down to a few things – no one could travel and everyone was stuck at home, so they had excess funds. A lot of the major retailers were on rent holidays and weren’t paying their interest. The government was paying their staff, so there was this strange environment where retail became an amazing place to invest. I certainly would caution against capitalising this forever as we will get back to normal, hence we are not chasing retailers at current prices.

We have never built an investment case around the successful development of vaccines, now the scenario where the world returns quickly to normal as they are rolled out. Nor did we skew our portfolio strongly to stocks which win during lockdowns. Hence we therefore did not see volatility in our portfolio during the major rotation in November.

Other comments on the operating environment

Housing activity is recovering. It wasn’t that strong last year, but this year’s different. It is definitely showing signs of life, because people are a bit more relaxed on bigger decisions now, and funding costs are so low – mortgage affordability calculations are now based on around 2.5% interest rates, as opposed to around 4% two years ago. If your salary hasn’t changed, you can spend almost twice as much on a house. That will stimulate housing activity, so things like CSR will probably benefit.

Tech stocks have had a really interesting last month in Australia. The Nasdaq hasn’t collapsed, but looking at things like Zip, and Afterpay, and Kogan, they were down 40%, 50% in a month, and that’s purely because the Australian market was clearly overvalued. We’re pretty disciplined on the price we pay for high-growth stocks. When Afterpay was at $160, clearly in hindsight, people just literally threw out the rule book on valuation and have lost 40% since.

Supply chains and purchasing are starting to show disruption and there is a shortage of shipping capacity in the world, impacting for example, caravans, cars, components. We need to be very careful how that impacts companies over the next 12 months that look like they’re trading okay, but if they can’t get what they need, then they can’t sell it.

We’ve recently added two new stocks, Genex and Adore. Adore is the makeup and beauty online retailer, growing from a low base, and we think has the capacity to take a lot of share over time. Genex is a green energy producer with a major pumped hydro project in remote Queensland which we believe will generate very strong, low risk cash flows as it comes on stream over the coming 24 months.

We sold out of four stocks as they hit the price target (Next DC and Fisher & Paykel Healthcare, and Bingo Industries) and Clover due to slippage in its sales line.

About two-thirds of our portfolio is in what we call defensive businesses. When we say defensive, we mean things that can grow, but don’t necessarily rely on a buoyant economy. Uniti Wireless is a classic case, as well as Austbrokers or Steadfast, the insurance brokers. These stocks are really strong in any environment, but can definitely grow.

We have 12% of our portfolio in cyclical sectors – a couple of mining services stocks and stocks that were exposed to the East Coast infrastructure spending, which we see increasing because of government stimulus, and a couple of stocks in the housing sector. When we look at cyclical stocks, we need to know that, as cycles are less predictable than stable businesses, the upside and the share price over the 12- to 24-month period is very strong. We wouldn’t get involved in cyclical stocks for a 10% return.

It’s been an interesting 12 months, and no one could have predicted in March 2020 as the pandemic hit what could happen to the markets. We’ve been extremely happy that the Pengana Emerging Companies Fund has outperformed over the past 12 months.

An Australian small caps fund with a 15+ year track record