The recent wave of regulatory reform in China has been highly visible, resulting in a knee-jerk reaction among investors, some of whom are questioning the viability of investing in China. There is precedence for major policy reforms, although historically not at this pace. China remains an area of significant interest and debate internally at Harding Loevner, the investment managers of the Pengana Harding Loevner International Fund. They have sought to understand the rationale behind this regulatory reform through a historical context to evaluate whether the risks associated with investing in China have increased.

We have witnessed the convergence of both policy and leadership cycles. China implements 5-year plans for both policy and leadership. This is the first full year of a 5-year policy plan as well as the last full year before 200 top leadership members who oversee policy come up for selection in October 2022 at the national party conference. They will be judged by what they have achieved, so are naturally eager to accomplish goals in a limited time frame. 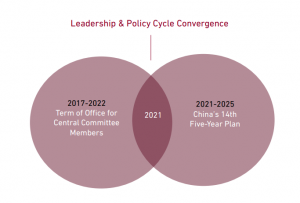 China has been focused on a trade war for much of the last 5 years as well as battling the impact of Covid-19.

China was able to contain Covid-19 domestically a lot more effectively than some other countries. However, the way this was achieved through stringent lockdowns have added to some serious pre-existing problems: Although none of these are new challenges, the confluence of poor economic and social conditions brings more urgency to addressing China’s key policy goals with Xi Jinping declaring in January that “We absolutely must not allow the gap between rich and poor to get wider,” and warning that “achieving common prosperity is not only an economic issue, but also a major political issue related to the party’s governing foundations.” One of the six priorities discussed over the last few years is Common Prosperity or inclusive growth, making sure everyone benefits from Economic growth. It’s about growing the pie and growing middle-class disposable income.

It is important to remember China’s starting point.

While it’s a huge economy, it doesn’t spend a lot on healthcare, education, or other forms of social spending. This is because it doesn’t collect a lot of taxes compared to more developed economies. China has also carried out the least redistribution of income of any major economy over the last decade. In other words, we should expect policies to converge to what developed economies have been doing for some time, especially as China builds out an improved social infrastructure and a better social safety net. The investment team, Harding Loevner, don’t believe regulatory crackdowns to encourage common prosperity are anti-business, nor are they capricious. In fact, they could prove to be a tailwind for the most innovative high-quality growth companies with scale.

Harding Loevner don’t consider these regulatory crackdowns are anti-business as much as they are focussed on equality and anti-trust. The changes to the Education sector provide an example. After school tutoring lifted children’s grades while taking an enormous toll on young people’s physical and mental health, and parents were spending a significant proportion of their incomes on tutoring to better equip their children for examinations. The idea you can buy better scores was highly offensive to the notion that China is a meritocracy. To the relief of parents occupying the broadest socioeconomic segments, policymakers decided to follow what South Korea did in 1980 and make the sector non for profit.

China has a very strong Executive, possibly the most powerful in the world, which means things get done faster. In a collection of speeches, Xi Jinping has laid out a framework of national rejuvenation which is essentially “the Chinese dream”. A dream which will show the world that there is a better economic and social model than the United States, take China back to an historic leadership role, and in doing so shake off the perceived national humiliation which was imposed on it by foreign powers.

Key to the team’s investment thesis is President Xi’s repeated emphasis on the importance of China taking leadership in research and development, and innovation across technology, sciences, and healthcare. Successful companies and a robust domestic capital market are essential in achieving these ambitions. Harding Loevner expect that the number of investable high-quality innovative growth businesses will only increase in China.

Consequently, China will remain a high-value target zone for the investment team, especially when it comes to innovation and healthcare. The potential risks can be managed in a similar fashion to other investment risks, with detailed company analysis and portfolio diversification. The bargaining power of the state now overpowers any other porter force (Porter’s 5 forces) in China. Tilting the bargaining power of companies to their customers. Interestingly, the names that Harding Loevner are finding in China as fundamental quality-growth companies score well against the global index. It’s a diversified group by industry, sector and market capitalisation. Harding Loevner are incredibly positive about investing in China, and believe the recent regulatory changes could act as a tailwind for high-quality innovative growth businesses such as WUXI Biologics which provides open-access, integrated technology platforms for biologics drug development and manufacturing.