A new source for private equity 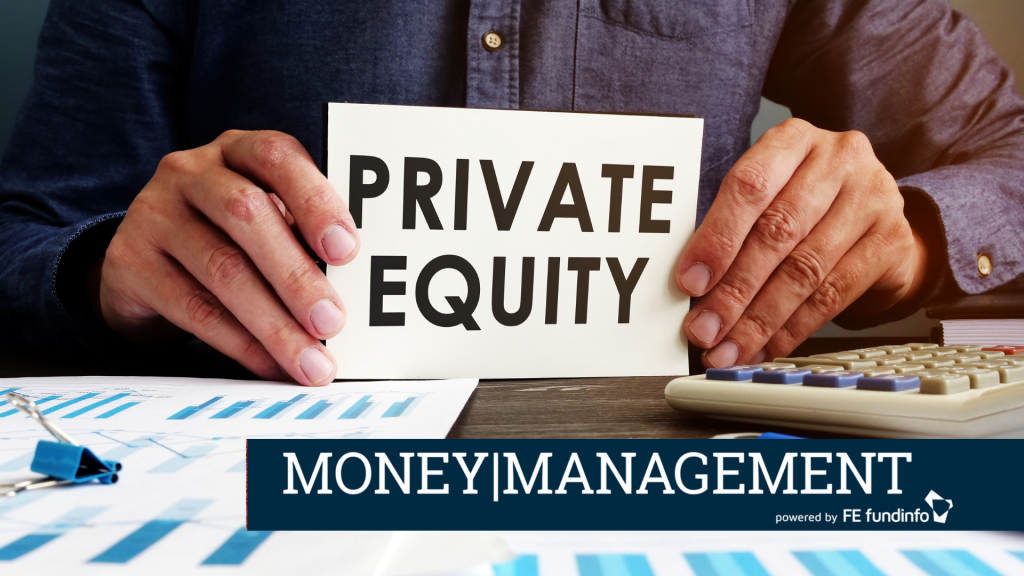 In the past, private equity funds were solely the preserve of institutional investors with long lock-up clauses and minimum investments reaching into the millions of dollars.

However, a confluence of factors are changing that now with funds appearing on platforms and pressure from superannuation funds pushing down fees. This was coinciding with a boom in deals thanks to an accumulated $14 billion in dry powder since the pandemic.

Private equity could add diversification to a portfolio as an alternative allocation or form part of an equities allocation. It could offer higher returns, have lower volatility over an extended period and it was often uncorrelated with returns from market indices, experts said.

According to alternatives manager Hamilton Lane, private equity on average generated an extra 83 cents per dollar invested since 2017 relative to public markets (Chart 1). 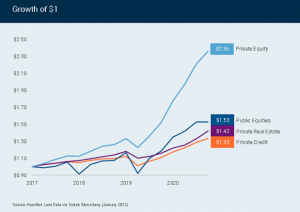 Thanks to firms being unable to visit Australia in person due to the pandemic, there was a significant pipeline for private equity deals. Most deals in 2020/21 had been by domestic players and international deals were expected to speed up now the borders had re-opened after almost two years.

This exacerbated the existing trend of companies holding off listing for several years in favour of private equity. Companies such as Spotify and Uber delayed listing while Elon Musk’s SpaceX, Australian graphic design platform Canva and payment platform Klarna were among those which still remained in private hands.

“It is not the easiest for retail investors to access but that is the case for most alternatives.

“Over the last two years, there has been $14 billion in dry powder accumulating that hasn’t been deployed and is likely to be deployed over the next two to three years.”

Simon James, partner at HLB Mann Judd, said: “Companies are tending to do multiple raises and go from private equity to private equity before they actually list. People are IPO’ing much later nowadays.

“I would expect to see a higher percentage of private equity transactions over the next 12 months given the sentiment at the moment.”

Growth-focused deals are those which invest in companies which are more advanced in commercialisation of products but still require high levels of investment. Other types include venture strategies for early-stage companies, buyout strategies and turnaround strategies for companies undergoing significant change.

Zinurova added: “Listing is a time-consuming process, there are a lot of regulatory requirements and the market requires full transparency. “There is a lot of emphasis on growth and that is not always beneficial for the business and the service they provide.”

“Some companies can also operate on a longer time horizon in the private markets than in the public ones as they aren’t required to report quarterly and there’s less short-term focus on their profitability and performance. When they are private, they can execute a strategy over a number of years without much concern about quarterly or annual fluctuations,” said Grose.

This positive opinion of the market environment was echoed by Pengana chief executive, Russel Pillemer, who announced a one for five entitlement offer for its Pengana Private Equity Trust to raise $75 million earlier this month. The volatile market environment, he said, was making firms reluctant to list on public markets, creating great opportunities for private equity.

“Now we are raising more cash to take advantage of opportunities, it is becoming more urgent in this environment as there are lots of deals taking place. With the oil price and the Ukraine war, markets are very skittish and no-one wants to be listing so if you have a chequebook on hand, then there are lots of good deals and we want to have cash on hand.”

With this strong pipeline for future deals, private equity funds were trying to broaden their investor base and lower fees to make it more accessible.

Grose said the push for lower fees had been driven by superannuation funds where fee pressure and M&A activity were both hot topics. While it was not the ‘root cause’, it was one of a confluence of factors which were driving the move to broaden the investor base.

“Traditionally, private equity managers in Australia have been very focused on trying to win investment from big institutions but fee pressure from super funds for greater fee transparency has meant they are very focused on headline fees rather than overall level of return.

“So now there’s more focus on GPs [general partners] to broaden the investor base beyond super funds and be part of a market that they haven’t worked with before. It is more common for them to target high net worth individuals and family offices but they are increasingly looking at how they can target retail investors.”

While it could be challenging to target the retail market given the structure of the funds, firms were finding ways to work around that. The Schroder Specialist Private Equity fund, for example, was open-ended with monthly investments and quarterly redemptions while the Pengana Private Equity Trust was structured as a listed investment company (LIC).

James Martin, head of international client solutions at Hamilton Lane, said it had always been tough for non-institutional investors to access private equity due to liquidity and minimum investment sizes but that this situation was changing.

“When you look at typical fund structures, they have very long time horizons and you need a large amount to invest. So it’s been challenging and the typical investor has been large institutions such as superannuation funds or sovereign wealth funds.

“But what we’ve seen in the last two years is more people from private wealth, family offices and even some retail vehicles who are making public markets more accessible.”

Private equity funds were also being added to platforms for the first time which was making more investors and financial advisers aware of them.

The Schroders fund had a minimum investment of $20,000 and was available on multiple platforms including HUB24, BT Wrap and Netwealth while, the Pengana LIC, which was managed by US firm Grosvenor Capital Management, had a minimum of $10,000. This compared to $5-10 million for institutions on a typical private equity fund.

However, while Grose agreed fees had been coming down, he cautioned this was not always the case for the retail investors who were more willing than super funds to accept a typical ‘2×20’ fee structure including a management fee and performance fee.

“The practical, sad reality is that the perception is retail investors or high net worth investors are less fee-sensitive and are more willing to accept a 2×20 fee structure. I’m not saying that’s a cynical attempt by managers to try to generate more management fees, I genuinely don’t think that, but if super funds are pushing hard on fees then managers are going to be thinking about where they can offset that a bit.”

Private equity funds were traditionally listed in the closed-ended space as they could go to their existing investors if they want to raise more money which allows them to implement long-term thinking (as is the action taken by Pengana). They were also easier for investors to exit as they could sell to another investor which allowed the strategy to not be eroded by redemptions.

While Pengana was the only dedicated private equity LIC, there were others such as Bailador Technology Investments which invested in early-stage companies in a similar way to private equity.

Ian Irvine, chief executive of the Listed Investment Companies and Trusts Association (LICAT) said: “This is a democratisation of what institutional and family offices were able to receive, it’s given access to retail investors and self-managed superannuation funds trustees.

“LICs are particularly attractive for SMSFs, especially those that are in pension phase because of their dividend and franked dividend characteristics so there a lot of SMSFs invested in LICs for that reason.

“[In LICs] there’s still a strong base of domestic equities and a growing base of global equities but there has been a lot of growth in the alternative space, which has been difficult to retail investors to access until the last five years.”

Looking ahead, Martin said it was unlikely that private equity would ever become a mainstream asset class for retail investors as the complications were too great.

“It’s a complicated asset class, there are some challenges to it. You need to be mindful that some of the risks inherent in the liquidity and work with a manager who has a long-term track record and expertise in thinking about portfolio construction, managing cashflow and diversification, these are all absolutely critical.”

However, others were more optimistic about future fund launches taking place, particularly once a ‘dominant’ retail fund structure for private equity had emerged.

“We could definitely see more funds in the future, I’ve been in the industry for over 15 years and I’m not aware of there ever being more demand for private equity as there is now,” said Grose.

Irvine added: “I can’t say why we haven’t had more launches but I think there will be more in the future and I believe the closed-ended structure is ideally suited to this type of asset”.